Though hardly recovered from ABA TECHSHOW 2017, I wanted to make sure that RTL readers remember to put a hold on the dates for next year's TECHSHOW in Chicago. Those dates are March 7-10, 2018.

And congratulations to our friends Debbie Foster and Tom Mighell for being named as the co-chairs of ABA TECHSHOW 2018. They are shown here clowning it up a bit as they get the publicity train rolling down the tracks.

Congratulations also go to my husband/business partner John Simek and our good friend Lincoln Mead for being named as the co-vice chairs of ABA TECHSHOW 2018.

New and improving technology, like voice enabled software or the internet of things, are really cool and may help out at your law firm, but they also introduce a new need for security. In this report from On The Road, host Laurence Colletti talks to Sherri Davidoff and John Simek about keeping legal data secure. They talk about free (that’s right, free) ways to encrypt devices and emails, as well as promoting two factor identification as an extra means of protection.

Listen to the podcast here.

#SenseiSherlock was delighted to join John and Sharon’s good friend, Reba Nance of the Colorado Bar Association, at the Past Chairs dinner at ABA TECHSHOW. 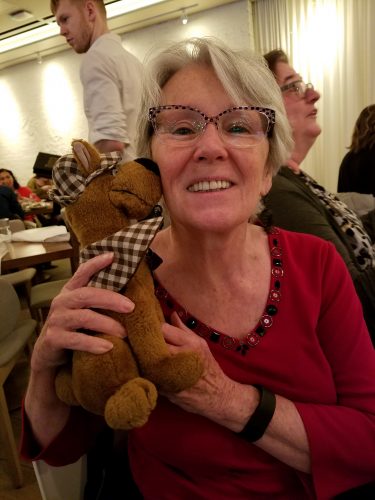 DarkReading reported that the 2017 Verizon Data Breach Digest (99 pages) breaks out 16 different attack scenarios and specifies the target, sophistication level, attributes, and attack patterns, along with their times to discovery and containment. The Digest is full of intriguing stories of online misconduct.

In one example, an online gaming company finds its production network hacked – and worse, points of top players were being siphoned off and customers' personal information might have been compromised as well. Network and application logs were quickly parsed and Verizon's RISK team identified 15 systems that process game-point transactions, yet only 14 of them were known to be legitimate resources.

Sure enough, the anomalous system, while valid, had been abandoned for more than a year after an employee left the company. But it remained attached to the network, if dormant, and was an inviting target for hackers who brute-forced it, then loaded it with malware to.

Situations like these, where hidden endpoints that could be anything from systems, user accounts, software, or data, are what Verizon labels "Unknown Unknowns," and are the hardest for organizations to plan for and react to, Verizon says in its latest Data Breach Digest (DBD) report. "We're seeing lots of cases of Unknown Unknowns … detection systems are picking up old and new malware that may be sitting there," said John Grim, senior manager and lead for Verizon's investigative response team. "We then come in and see if it's done any damage or if it's just laying in wait. Sometimes they emerge when we do testing."

The DBD has two objectives: Sketch out the complexity of the most common kinds of attacks, and provide a guidebook for all the individuals affected in the chain of command.

In another DBD scenario dubbed "Mobile Assault – The Secret Squirrel," Verizon outlines the problems faced by a business traveler who may be forced to use sketchy Wi-Fi networks, hand over their laptop or smartphone at security checkpoints or immigration areas, or are required to decrypt their devices completely. There's also the potential for loss, theft, or device tampering in a hotel room; in some instances, specific companies and individual personnel are targeted for the high-value data they carry or are able to access.

The fix for Mobile Assault is very simple. Employees no longer travel with their assigned corporate devices, but instead are given "travel" smartphones and laptops, and after every trip, these devices are wiped clean and rebuilt. "From a forensic examination standpoint, having this known baseline image to compare against drastically reduces analysis time and helps [the organization] focus on potential problems rather than background noise," Verizon says in the new DBD report.

The report also deconstructs the complexity of breaches from a human standpoint and a stakeholder perspective, Grim told Dark Reading. It's no longer enough to tell companies and end-user organizations, "This is the malware, and this is how you fix it," Grim added. "HR and legal need to be involved too if it's an inside threat or involves employee records." Grim was quick to emphasize that the DBD report isn't just for IT staff or InfoSec professionals. Human resources professionals can query the report for HR issues, or HR in a specific industry sector. Incident responders can also query by industry, Grim said.

The DBD uses data derived from the Verizon's more comprehensive Data Breach Investigation Report. This is the second year Verizon has released the digest.

Verizon also offers a five-point incident response plan for organizations that have discovered any kind of data breach: 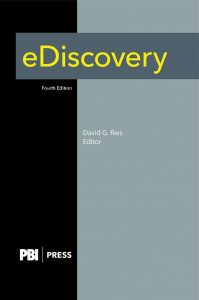 The 4th edition of eDiscovery is now available from the Pennsylvania Bar Institute (PBI). This book was edited by David Ries and written by multiple experts in the field, including our very own Sharon Nelson and John Simek who wrote chapter eight “Digital Forensics Best Practices.”

About the book: Electronic discovery is the norm in today’s litigation. It is critical for litigators and parties to understand the basic legal and technical issues and to know where to go for assistance with advanced issues in both of these areas. eDiscovery serves as an easy-to-read and reliable road map that will carefully guide you through the often complex world of e-discovery. The book is an excellent resource for the litigator trying to stay current with the ever-changing landscape of electronic discovery.

Excerpt: “Are there really such things as best practices for computer forensics? Opinions vary, but there are generally accepted practices in the profession that provide terrific guidance. We’ve attempted to assemble procedures from varying practitioners considered to be the best in the industry.

Let’s start at the beginning. What is computer forensics? “ 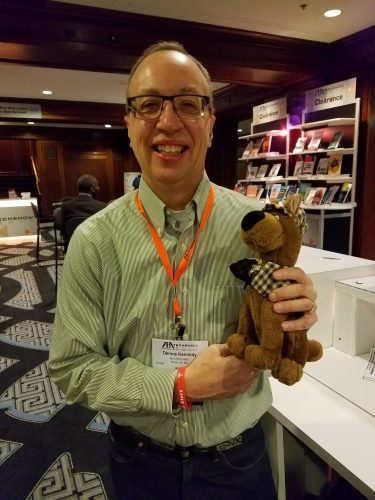 The New York Times reported on March 15th that the Justice Department had charged two Russian intelligence officers on March 15th with directing a sweeping criminal conspiracy that stole data from 500 million Yahoo accounts in 2014.

The Russian government used the information obtained by the intelligence officers and two other men to spy on a range of targets, from White House and military officials to executives at banks, two American cloud computing companies, an airline and a gambling regulator in Nevada, according to an indictment. The stolen data was also used to spy on Russian government officials and business executives, federal prosecutors said.

Well, that sure cuts a wide swath.

Russians have been accused of other cyberattacks on the United States — most notably the theft of emails last year from the Democratic National Committee. But the Yahoo case is the first time that federal prosecutors have brought cybercrime charges against Russian intelligence officials, according to the Justice Department.

American investigators are particularly aghast that the two Russian intelligence agents they say directed the scheme, Dmitry Aleksandrovich Dokuchaev and Igor Anatolyevich Sushchin, worked for an arm of Russia's Federal Security Service, or F.S.B., that is supposed to help foreign intelligence agencies catch cybercriminals. Instead, the officials helped the hackers avoid detection.

The two other men named in the indictment include a Russian hacker already indicted in connection with three other computer network intrusions and a Kazakh national living in Canada. One of the hackers also conducted an extensive spamming operation, stole credit and gift card information, and diverted Yahoo users looking for erectile dysfunction drugs to a particular pharmacy. Getting a kickback, I suppose.

Karim Baratov is the only one of the accused hackers who has been arrested in connection with the case. He was captured by the authorities in Canada on March 14th. The chances of the United States taking the other three into custody any time soon appear slim to none, especially because the United States has no extradition treaty with Russia.

The fourth person involved in the scheme, a Russian named Alexsey Belan, had been indicted twice before for three intrusions into American e-commerce companies. At one point, he was arrested in Europe, but he escaped to Russia before he could be extradited. Prosecutors said they had repeatedly asked the Russian government to hand over Mr. Belan but had gotten no response.

Yahoo disclosed the theft of its data in September and said it was working with the law enforcement authorities to trace the perpetrators. The hackers were able to use the stolen information, which included personal data as well as encrypted passwords, to create a tool that gave them access to 32 million accounts over a period of two years.

In a statement on March 15th, Yahoo thanked the FBI and the Justice Department for their work.

It remains unclear why Yahoo users were not informed about the hack during the two-year investigation. An internal investigation by the company's board found that some senior executives and information security personnel were aware of the breach shortly after it occurred but "failed to properly comprehend or investigate" the situation. Two weeks ago, the company's top lawyer, Ronald S. Bell, resigned over the episode, and its chief executive, Marissa Mayer, lost her 2016 bonus and 2017 stock compensation.

We are, in case anyone has failed to notice, in a cyberwar with Russia.

As a lawyer, sometimes paranoia is a good thing. Legal professionals are constantly handling sensitive information that needs protection, whether it’s details about a case or client data. In this episode of Digital Detectives, hosts Sharon Nelson and John Simek talk to Charles Patterson about TSCM (technical surveillance countermeasures) and how this extra level of security can ensure your private information stays private. As the president of Exec Security, a TSCM services company, Charles shares about why lawyers need TSCM, how these sweeps are performed, and provides tips on how to protect yourself from situations that could compromise your confidential information.

Listen to the podcast here.

#SenseiSherlock was delighted to meet MyCase blogger Niki Black when Sharon and John attended the Beer for Bloggers party at ABA TECHSHOW. 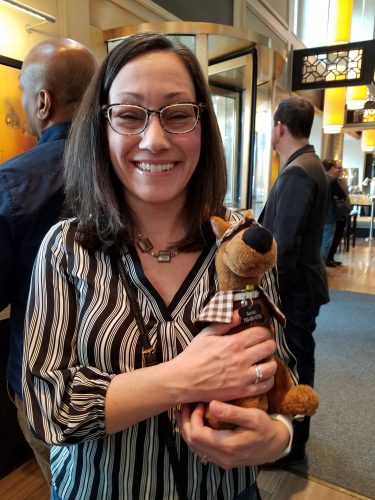 #SenseiSherlock reveled in the affection from Andy Atkins (left) & Gayle O’Connor (right) at a lovely dinner hosted by Social-Evidence. 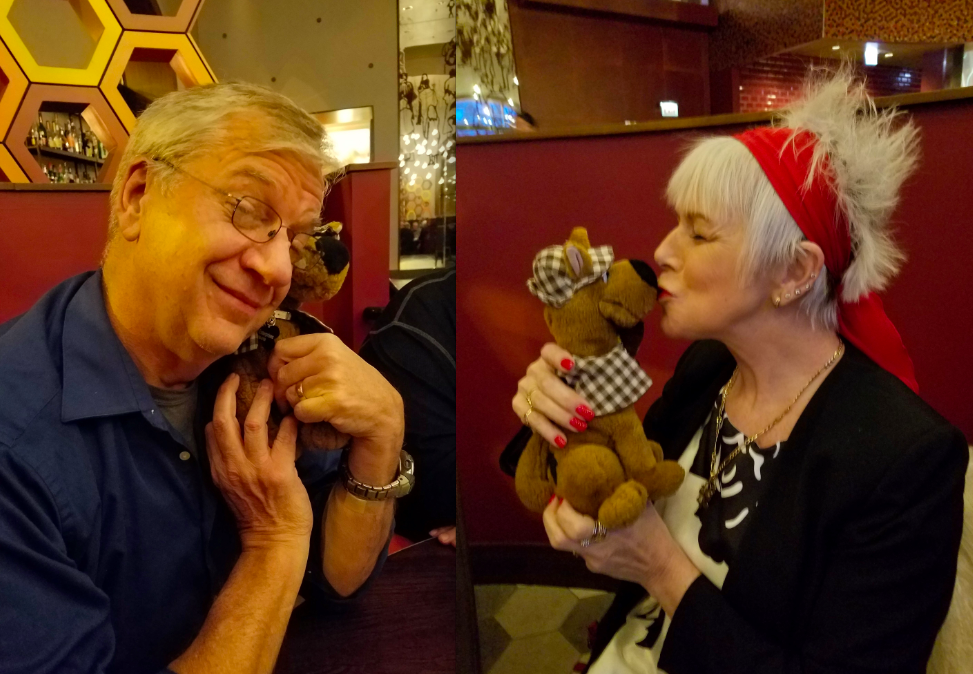